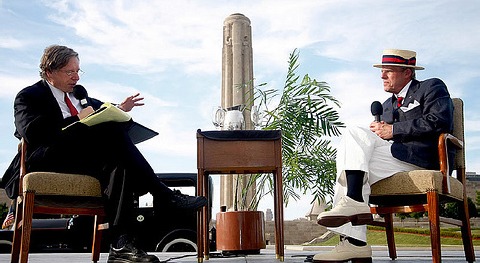 What does a normal performance entail?

A normal performance lasts about forty-five minutes and is a relaxed one-way conversation with the President in which he will talk about his early life, his education and career as an educator, his entry into politics, his meteoric rise to the Presidency, the key events and issues facing the nation during his eight years in the White House, the Great War and its aftermath, and his final years. The conversation is drawn almost entirely from direct quotes taken from the President’s speeches and writings. If so desired, a question-and-answer period can follow..

What will it cost to have Mr. Bankert appear at our event?

There is no set fee for a performance. It will depend on the cost of travel and lodging required and the nature of the performance. Once you have provided Judd with the details of your event he will be able to tell you how much he will require for his appearance.

How far in advance do we need to book an appearance?

The sooner you can confirm your booking the better. If a unique program is needed for your event this is even more critical. Start by calling or e-mailing Judd about your event now, even if it is still only at the very earliest planning stages. It is not unusual to enter into a performance agreement a year or more ahead of time. By so doing you can guarantee Judd will be available.

Will you be celebrating a centennial?  Woodrow Wilson was President of the United States from 1912 until 1921. How fitting to have the person who was President when your organizations were formed or your historic event took place appear as part of your centennial celebration.